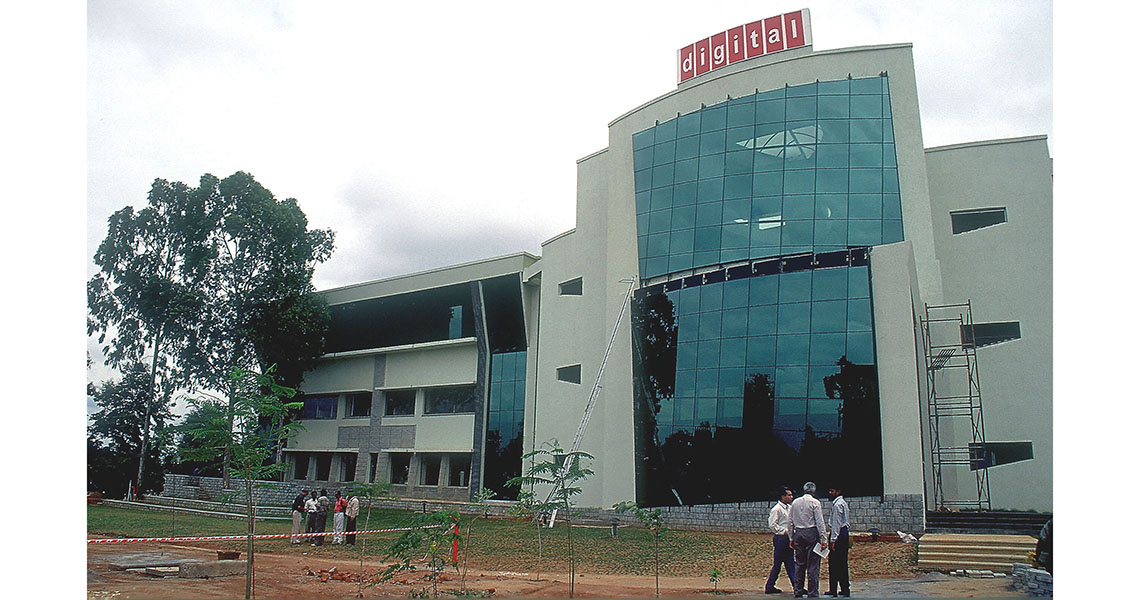 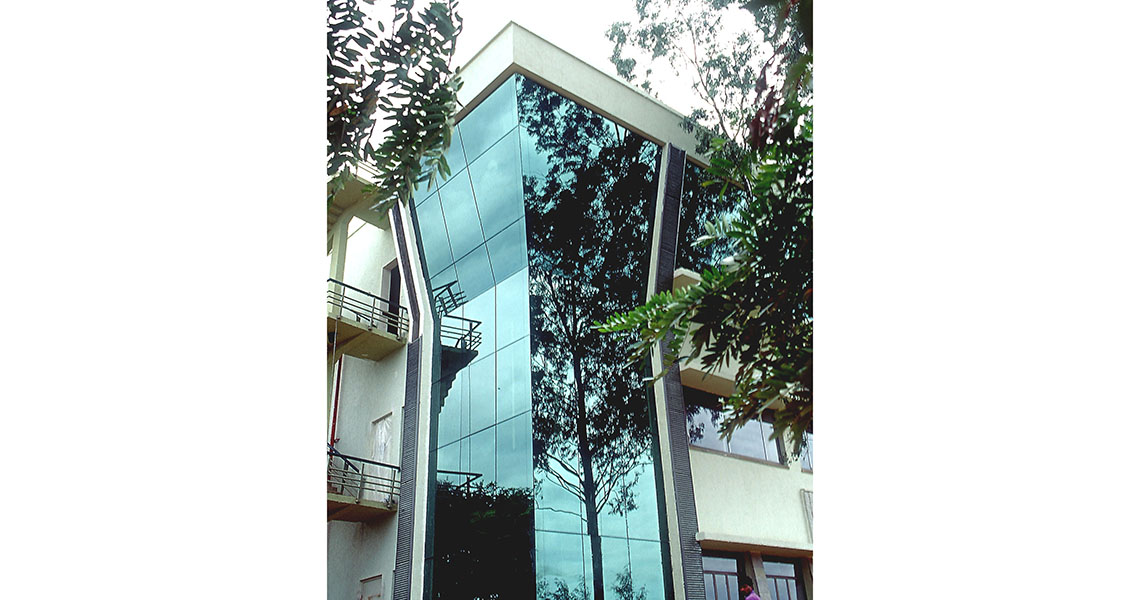 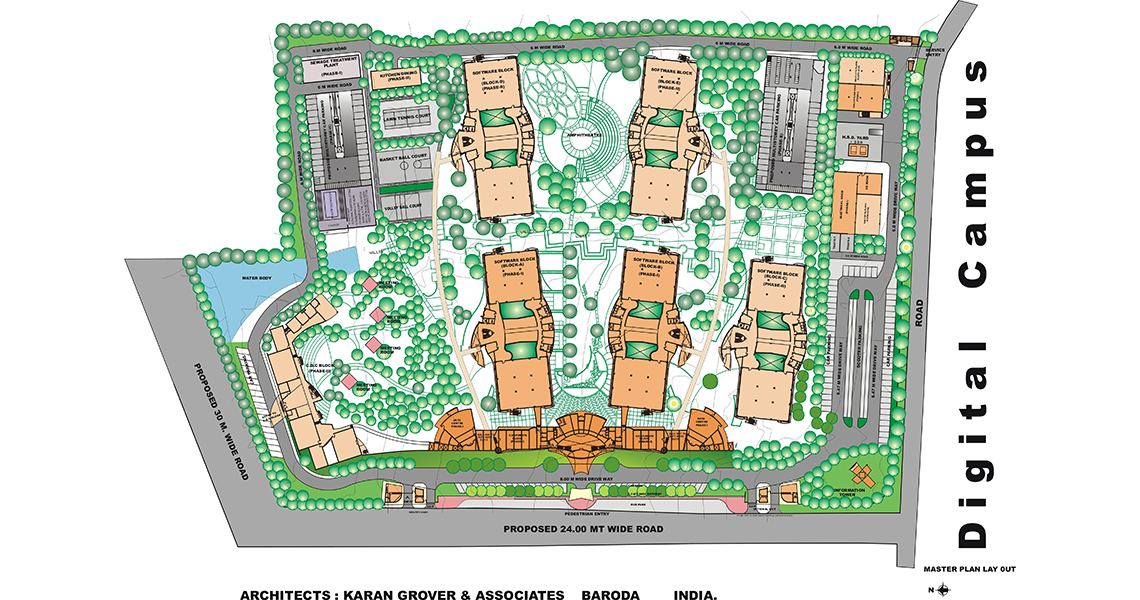 At the outset the striking and unique 20 acres site (with roads on 3 sides) at Electronic City, Bangalore set the pace for the project by virtue of its inherent topological configuration and geography. The 'Environment’ of the site, the forest & ‘greens’ directly informed the project conceptualization. The ‘Green Campus’ ideas evolved as we consciously began to look and link these notions with the 5 fundamental elements of the Environment and Nature. It was imperative to interlink and connect with the larger fundamental facets of the environment – which are going to be the issues of concern for the future. Hence sensitivity to ecology becomes primal to the concept, its formalizations, symbolizations, character of spaces etc.

The sloping site with an elevational differential of 9 metres and a narrow Green Valley through the middle of the site, the central feature sparked the initial ideas to create a work environment, as a campus – which is technologically most advanced & state-of-the-art yet innately sensitive to nature and ecology, environment & ‘greens’.

The approach called for cognizing a new typology, which has emerged internationally through globalization & information technology growth. While making a Campus the need was for siting the project within the conceptual, functional and aesthetic framework of international & global corporate ethos with a very contemporary design agenda. This idea had to be simultaneously be woven with the local and contextual reality, symbolism & materials of construction.

Orientation of the site vis-à-vis sun-path movement, local climate aspects are integrated to the design concept.

The ‘work place’ is focal to the global metropolis notion today. Hence it was imperative to situate the project within this context of innovating futuristic work environments.

In the world of Information Technology the ‘work place’ is essentially the ‘work station’ while the space beyond the work station – has to become a space for social transaction, interaction, recreation, rejuvenation. This other space ‘outside’ is not a passage but a ‘place’ with a much larger design agenda at Digital.

This conceptual thinking intends to create series of layers of ‘interactive spaces’ – both amidst humans and with nature. The buildings have also been punctuated by these in-between ‘spaces and places’ – designed inside out and outside in.

The ‘campus’ hence becomes a ‘canvas’, a place for social and business interactions, growth and evolution opening new vistas for corporate operations for the future.

The site with the focal valley inspired a layout with a continual dialogue with ‘Nature’, the outside, the ‘Landscapes’. The shape of site, orientation vis-à-vis sun-paths, access inherently influenced the conception of the layout. It was essential to situate the Major Blocks along the North-South Axis to avoid the East & West sunlight in to the work spaces. Another Block (Corporate) was designed to act as a physical and visual connector to protect and hide exciting Green spaces within. It becomes like the face of the project on the entrance side enabling ‘windows’ to look / glimpse into the life and the ‘Green’ of the Campus – as surprising vistas. The Software Blocks would sit perpendicular to the face like ‘fingers’ penetrating the site as they grow inwards and recede into the site. The ‘valley’ is seen as the central spinal ‘connector’ - the most exciting ‘natural’ focus on the site, and the natural water drainage of the site.

The overall gets structured by a method in which the builtscape sits along continuous landscape layers of various scales from the inner courtyard to the formal garden to the forest. These green layers continually interlock the building with nature. On the formal central axis sits the large green space with the dramatic waterbody as its focus. The axis breaks down towards the valley being more human, and organic, with promenades along the valley.

Ultimately the 4 semi-open food courts will begin to define the character of the place – which will eventually culminate in a large open amphitheatre – the cultural life centre of the Campus.

At the outset it was also decided to leave land vacant for a ‘forest’ on the site, amidst which discussion rooms and meeting spaces would be located. The vegetated valley, the forest separating it, the recreational facilities i.e. gyms, outdoor games etc. on the other side, the water reservoir at the lowest end of the site dammed for rainwater harvesting and ground water re-charging will be the physical heart of the Campus – the spirit of the Campus.

Other salience in the layout is in the idea of a peripheral circular movement route to service the campus, 4 gates including a service gate, dominant pivotal positions for the CDC (Competency Development Centre) & Communication towers and data centers, Network of walkways curvilinear covered pathways that move across the site etc.

Movement has been designed to make the Campus handicapped friendly integrating ramps, safety bars and railings enabling access to most parts of the site.